Experiments with Prometheus and Grafana

I have been learning Prometheus for the last week in order to prepare for a new position I am starting with Freshtracks.io. In order actually get some data into prometheus, I made a small service that scrapes and indexes a Gmail inbox into elasticsearch. I then instrumented this application using Prometheus, which allows me to collect data on the rate and response times to fetch messages from Gmail, and index them into elasticsearch. You can find the raw source code on GitHub at csmarchbanks/gmail-scraper.

Setting up prometheus using docker-compose can be done by simply adding the following service:

where prometheus.yml specifies the scrape configs we want to use

Just using prometheus, it was easy to add a couple queries to the built in expression browser, for example rate(email_scraper_index_email_seconds_count[5s]) would give me the 5 second rate of emails being indexed (emails/sec) into elasticsearch. For example, if 400 emails were indexed in a 5 second period, a value of 80 emails/second would be plotted. For my personal inbox the indexing rate looks like:

Not the prettiest graph, but easy to do ad-hoc queries. You can also do fancier metrics with histograms such as histogram_quantile(.9, rate(email_scraper_get_email_seconds_bucket[5s])) which will return the p90 response time (sec) for getting an email from Gmail. The Prometheus docs give a great explanation of how quantiles are calculated.

Prometheus by itself is fine for ad-hoc queries, but to get meaningful graphs Grafana is a great tool. To add Grafana to our system, all that needs to be done is to add a service and new volume (grafana_data) for Grafana:

Navigating to http://localhost:3000, add a datasource with URL http://prometheus:9090, and you can start making graphs immediately. For example, I was interested in seeing how long it took to fetch an email from Gmail vs index the email into elasticsearch. To do this, I made a graph with two queries:

and set it up as a stacked bar graph to quickly see how long both operations took, and their ratio.

As you can see, getting emails from Gmail, takes significantly longer than indexing them to elasticsearch. Another interesting metric to look at is rate(process_cpu_seconds_total{job="gmail-scraper"}[5s]) to see the load our scraper is causing.

The scrape job barely used any local cpu, especially since I am using a machine with 8 cores, so max cpu would be around 800%. Armed with this knowledge, and the fact that most of the indexing time was spent waiting for responses to come back from Gmail, it is reasonable to hypothesize that increasing the number of worker goroutines could massively improve how fast an inbox can be scraped. By updating WORKERS in our docker-compose file from 16 to 128, indexing my entire inbox now takes < 1 minute, compared to around 4 minutes.

Setting up Prometheus and Grafana to record metrics for an application was quite simple, and even for our small test application it was possible to get meaningful metrics to understand what was happening and where bottlenecks lay in our application. I look forward to using Prometheus more in production, and learning how it scales 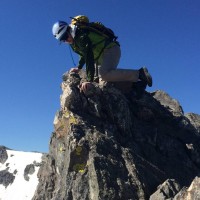